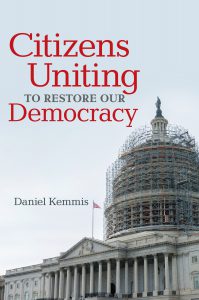 Citizens Uniting offers a fresh perspective on the major challenges now besetting our democracy, along with some new ways of thinking about solutions.

The election of 2016 threw the country into political waters so unfamiliar and turbulent that many  Americans lost sight altogether of how sick and wounded our democracy had already become in the years before 2016.

This book seeks to lengthen our time horizons by reminding readers both that the major problems now besetting our democracy have roots reaching years before the 2016 election, and that any meaningful efforts to fashion solutions will have to be sustained well beyond the next election.

In addition to taking a longer view, the book adds a layer of depth missing from most analyses of political dysfunction by focusing on the transformative potential latent in the everyday practice of engaged citizenship. Leveraged by new mechanisms like an effective democracy lobby of the kind the book advocates, that deep reservoir of active, hands-on citizenship must now be mobilized into a 21st century version of the Progressive movement, channeling our collective resources into the revitalization of our democratic institutions.

You can find Citizens Uniting at  Barnes & Noble or Amazon, or ask for it at your local bookstore.