Skip to content
Home/Blog/Georgia on Our Minds
Previous Next

Georgia on Our Minds 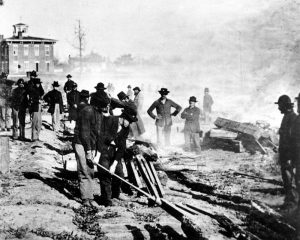 In the six weeks remaining before the January 5 Georgia runoff elections, you will very likely be asked (perhaps even asked daily) to contribute to one or more of the campaigns.  Whether you choose to do that or not is well beyond my capacity to influence, so I won’t try that.  I will, though, offer an observation or two for your consideration.

First, from what I can make out about the geographic spread of this blog’s mailing list, there is very little chance that you yourself are a Georgian.  Old-fashioned as it no doubt is to say so, I still think that should matter, simply because place matters, and federalism matters.  These senators are theoretically going to represent the people of Georgia.  In some possible universe, that would mean than not only would the winners have garnered the most Georgian votes, but they would also have gained those votes on the strength of Georgian financial support.  The votes will assuredly be Georgian, but the money not so much.

Having just endured a fully nationalized U.S. Senate race here in Montana, I would (if I thought it would do any good at all) ask my non-Montana acquaintances to stay out of our next Senate election.  That’s not because of the outcome of this year’s election, little to my liking as that outcome was, but because I so regret the new normal of nationalizing every genuinely contested Senate race.  I have no expectation, though, of influencing a dynamic that is now well beyond my or any Montanan’s (or any Georgian’s) control.

Still, if I could, I would tie all the out-of-state contributors to our recent Montana Senate race to a chair in front of a TV or computer screen and let them enjoy hours stretching into days and weeks of the constant stream of negativity that was the inevitable result of the obscene amount of money spent here.  The more money they sent, the longer they’d get to sit there.  And then I’d ask whether, for the next 6 weeks, we really want to inflict on our Georgia neighbors our own 21st century version of Sherman’s march to the sea?

But none of that kind of ranting could possibly do the tiniest amount of good.  Georgia’s Senate races will be drowned in cash from across the country; most of it will buy the same kind of negative garbage that we were treated to in Montana, and in the end, the U.S. Senate will most likely be so composed as to extend for at least two more years the debilitating gridlock of American government.

Yet behind my Eeyore-ish attitude lies something just barely more optimistic.  It comes with this glimmer of hope: that instead of (or in addition to) any outside money that any of us might send to Georgia in the coming weeks, some of us might consider investing in one or more of the democratic reforms that would make future Georgias just a little less likely. One such possibility was presented earlier this month by a state about as far from Georgia as you can get.  In Alaska, voters approved a ballot initiative to establish an open, top-four primary, combined with ranked-choice (or “instant runoff”) voting.  The details of the Alaska initiative are not quite the point here, but you can readily gather them from this excellent essay by Hedrick Smith.  The nub of the matter is that ranked-choice voting very neatly and effectively eliminates the need for runoffs, while insuring that, in the end, the majority rules.

No matter what happens on January 5 in Georgia, that event and everything that Georgians will be subjected to in the meantime is just one more reminder of the many ways in which our democratic institutions are so deeply and deplorably wounded.  As I suggested in an earlier blog post, and as I argue at greater length in Citizens Uniting, one constructive response to that situation would be to set aside some small part of the resources that any of us might otherwise pour into feeding the beast, and instead devote that “democracy tithe” to reform efforts like the one that just passed in Alaska.  You couldn’t go wrong, for example, by making a contribution to FairVote, the solid reform organization that has made ranked choice voting the centerpiece of its broad menu of reform initiatives.  Or you could support Hedrick Smith’s Reclaim the American Dream, or any of the dozens of other reform or democracy-strengthening efforts you’ll find on the Citizens Uniting site. I’m not asking anyone to stay out of Georgia’s Senate races who feels highly motivated to get involved, but this might be a chance to begin redirecting some marginal amount of our attention and resources to the long game stretching out ahead of us, regardless of what happens in Georgia.